Blog - Latest News
You are here: Home1 / What is grade resistance?

Grade resistance is the rearward acting force component of the vehicle weight on a grade. It is the amount of force required to overcome gravity, and is given as .01 times the gross weight times the percentage grade, with units of pound force. 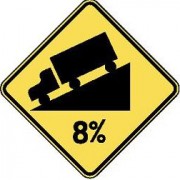 The slope of the grade is not expressed in degrees, but in a percent value (rise divided by the horizontal distance).

In the truck industry, Grade Resistance is usually expressed as the net horsepower necessary to overcome the grade. To move 1,000 pounds up a 1% grade at 37.5 mph requires one horsepower. 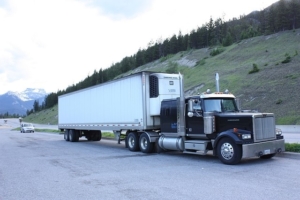 Gravity is a feature of our universal experience, and a truck moving up a grade experiences it as well. This force equals the mass times gravity (F=m x g). Power is required to overcome this force, and is a function of the vehicle mass, the grade and the vehicle speed (see the formula below).

Why Does It Matter?

The engine power must overcome air resistance, rolling resistance as well as grade resistance, all the while experiencing parasitic mechanical losses. The higher the weight and speed, the higher is the power required to overcome the grade.

How Can You Reduce It?

When moving a loaded vehicle up a grade, the only variable that the driver can influence is speed.

How Is Grade Measured?

According to the SAE procedure, Truck Ability Rating, horsepower required to overcome a grade at speed is calculated as follows:

Note that this is only the net power at the flywheel, due to the Grade, and to which must be added power loss due to Rolling Resistance and Aerodynamic Resistance (see other sections on this site).

Demand Power As A Function Of Speed

An 80,000 lb. vehicle travelling at the stated speeds and grades requires the following power (excluding aerodynamic and rolling losses):

Note how the power demand increases by some 50% by running up the same 5% grade merely by raising the speed from 40 mph to 60 mph.

The takeaway here is that performance on grades is highly influenced by unrealistic expectations of high speed. Too high speed on steep grades leads to impossible power demand.